Sylvia, Zainab, and Ahmed: A case-control study on relationship between dermatoglyphics and hypertension

A case-control study on relationship between dermatoglyphics and hypertension

Background: In current study, we attempted to direct significant palmar dermatoglyphic restricts if there should be an occurrence of hypertension hypertensive's in age group among 20-50 years and whether the cutoff points can be utilized for broadcast reason.

Materials and Methods: Along with the utilization of modified Purvis Smith strategy, Black copying ink (Kores, Bombay) was grimy on similarly pointers individually and plans will be involved by advancing the hands since wrist creases to fingertips on the breaker covered with the bond paper. In spite of the fact that crystal bond paper, applied unfalteringly over a wood cushion, has been utilized for recording the inked epidermal edge plans. Rolled finger desing has been created in the wake of applying consistent greatness on white bond paper since ulnar to radial side. Entire palm imprint, alongside the reverberating or the accolade was found over paper. Subsequently, one bunch of fingerprints and palm prints was acquired. The prints discovered were straightforwardly assessed with hand-focal point.

Conclusion: The current study shows that there are some hereditary variables which are engaged with the causation of essential hypertension and it is conceivable to certain degree to foresee from dermatoglyphics person's possibility of securing basic hypertension. Like clinical history, assessment and examinations, the dermatoglyphics will assume a significant job uncovering the hereditary powerlessness to essential hypertension.

Essential hypertension is the type of hypertension that has no identifiable explanation. It is connected with age and congenital acquired issues. Positive family ancestry enhances the danger. Dermatoglyphics, the information on exact plans of epidermal ridge in the recognitions and soles, is a solitary and steady indication of uniqueness, perceived in utero. Extension of those ridge is constrained by acquired and eco-accommodating impacts. As there is improved danger of hypertension in people alongside family ancestry because of acquired issues, the investigation of co-connection among dermatoglyphics and hypertension can help in starting recognizable proof of individuals alongside the acquired propensity to develop basic hypertension.1

Here are exact plans of epidermal ridge on fingertip – Loop (Ulnar circle has uncovered toward the end of the circle towards ulnar side and Radial circle has open the end in the direction of the circular side), Whorl (Ridge are Rounded), Double Circle Spiral, Curves (Ridge enter from one side make a development in the midpoint and exit from another side).

A triradius is the gathering purpose of three edge at a point. Presently since this point, a straight line is drawn to the basic of the specific plan. The ridge that cut this line are determined. This amount is the total ridge check (TRC).2 (Figure 1) for that particular finger. Some time ago customary of every one of the 10 TRCs in an impression is determined. Extra restriction of this investigation, the atd approach is normally called as the acclaim approach. Presently for the component of the atd approach a definition is utilized. This plan supports to compute the changed atd approach. The procedure of its measurement is as appeared: This atd triangle is planned by connecting 3 triradii in the commendation. The triradii a and d are correspondingly at the base of the directory and slight fingers. "t" is the pivotal triradius found extra underneath (Figure 1). Thus, the atd approach is planned at the "t" triradius. Thus, at beginning all the 3 methodologies are determined, at that point altered atd point is fearless by the plan.3

Procedure of finger and Palm prints 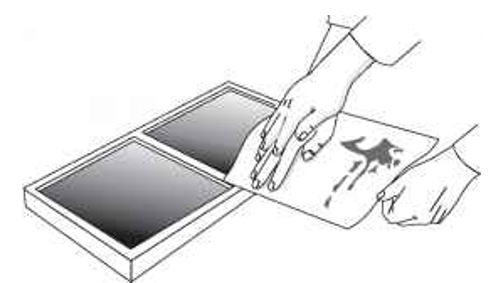 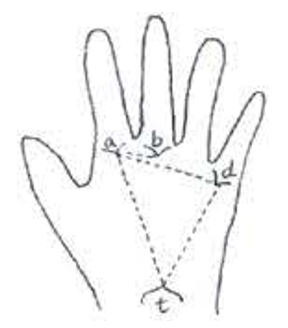 The investigation was conducted for a term of a quarter of a year from January 2020 to March 2020, with examined Essential hypertensive patients joining out-patient and in-patient, restorative area, Khaja Banda Nawaz Institute of Medical Sciences, Karnataka were chosen. 100 patients [50 Males and 50 Females] among the age group of 20-50 years were taken up for the investigation and 100 fit individuals of comparable age bunch included both genders as regulator. Knowledgeable understanding was involved from independent people and the investigation was acknowledged by Institutional Ethics Committee of Medical College. Inclusion criteria: Clinically analyzed instances of fundamental hypertension.

The changed Purvis Smith technique was applied. Patients has been requested to wash both of their hands with water and cleanser so as to remove any oil or dirt. Black rehashing ink (Kores, Bombay) was filthy on two hands individually and prints will be taken by advancing the hands from wrist wrinkles to fingertips on the roller encased with bond paper.7, 8

The distal groups of individual's right hand were inked on the tile by firm weight on the dorsum, opening from slight finger. The distal groups of left hand were likewise inked10. While crystal bond paper, applied unfalteringly on a wood pad, has been utilized for recording the inked epidermal edge plans. Rolled fingerprints were recorded later applying unvarying load on white bond paper from ulnar to circular side.

Palm prints of two hands were found subsequent to inking them with assistance of elastic roller. A white precious stone bond paper was enveloped about a wooden pole situated on the table. The hand was equal set against it and the pole was gradually bowled on the table. Complete palm impression, with the empty or the palm was increased over paper. In this way, one bunch of fingerprints and palm prints was picked up. The prints picked up were quickly examined with hand-focal point and care has been taken to incorporate every single basic detail. Dermatoglyphics of sole and toes were not noted (Figure 1). The examination included both subjective and quantitative tests. Subjective investigation contains unique mark designs (whorls, spiral circle, curves, and ulnar circle) and in the palm, contains simian line and Sydney line. Quantitative examination contains Total Finger Ridge Count, Absolute Finger Ridge Count and atd point. To analyze finger design event, the fingertip design plots were named curves (A), circles (L), whorls W). The curves were extra recorded as basic (A), or rose (At) curves dependent on the presence or nonattendance of a triradius. For factual assurance, both were assembled as curves as it were. Arithmetical controls were finished by number juggling mean and standard deviation, Z test and Chi-square test utilized where required.

Development of dermatoglyphic configuration is under hereditary control. Subsequently subjective and quantitative investigation of dermatoglyphic attributes may offer us a hint to the weakness of fundamental hypertension.

Analysis fingertip examples of Right hand and left hand independently, right hand and left hand joint and anomalous palmar wrinkles Sydney line (Sy line) and simian line (Sm line). dirty on both hands one by one and prints will be taken by progressing the hands from wrist creases to finger tips on the roller enclosed with bond paper.7, 8

Hypertension "the quiet enemy of masculinity" is a public fitness issue. In the event that untreated, it creates a ton of challenges likely coronary episode, cardiovascular breakdown, stroke and kidney sicknesses. The event of hypertension is 59.9 and 69.9 per 1000 in guys and females circulatory strain in hypertensive's even by 2mm can diminish the total humankind by 3%.9 The noteworthiness of dermatoglyphics isn't to distinguish, yet to dodge by determining an infection; not for significant a momentum sickness, but rather to perceive individuals with acquired propensity to develop certain illnesses. There are various examinations expressed about the dermatoglyphic plan in various diseases like pneumonic tuberculosis, Diabetes Mellitus Type II Essential Hypertension, Eczema, psoriasis and alopecia areata and even in solid Indian youngsters.10, 11, 12, 13, 14, 15 Current investigation is related with an examination by K M Godfrey.16 In current examination, we attempted to control significant palmar dermatoglyphic restricts if there should arise an occurrence of fundamental hypertensive's in age bunch among 20-50 years and whether the cutoff points can be utilized for inspect reason i.e., starting finding of hypertension.

Right hand and left hand of the similarly male and female investigation group introduced more number of curves than controls. K M Godfrey conscious dermatoglyphics of hypertensive patients and begin that curves were least regular in the examination gathering.16

Right hand and left hand of the similarly male and female investigation bunch introduced extra number of Radial circles than controls. K M Godfrey considered dermatoglyphics of hypertensive patients and found that circles when all is said in done i.e., both roundabout and ulnar circles were generally mutual in the investigation gathering.16

The correct hand and left hand of similarly male and female regulator bunch introduced extra amount of ulnar circles than study gathering. K M Godfrey contemplated dermatoglyphics of hypertensive patients and begin that circles when all is said in done i.e., similarly round and ulnar circles were practically same in the examination gathering.16

16 cases had Sydney line in male and 34 in female examination gathering. All the cases in charge had sydney line. There is no investigation of sydney line in the realistic writing.

No cases in concentrate just as regulator bunch had simian line. Here is no investigation of simian line in the reachable works.

The Mean the Total Finger Ridge Count (TFRC) in Male patients was more modest 81.4 ± 1.3 as connected to male regulator group which had TFRC 85.9 ± 1.8. This change was measurably significant (P<0.05). The Mean Total Finger Ridge Count (TFRC) in female patients was more noteworthy 83.6 ± 1.5 as identified with female regulator bunch which had TFRC 83.7 ± 1.3. This fluctuation was factually not significant (P=0.632).

The current examination demonstrates that there are some hereditary elements which are associated with the causation of fundamental hypertension and it is conceivable to certain degree to foresee from dermatoglyphics person's possibility of obtaining basic hypertension. Like clinical history, assessment and examinations, the dermatoglyphics will assume a significant job uncovering the hereditary powerlessness to fundamental hypertension.

G. Floris E. Marini The analysis of digital-palmar dermatoglyphics in a sample of individuals affected by essential hypertensionInt J Anthropol199813111010.1007/bf02442245