Introduction: Foreign body aspiration is a major cause of accidental death in children. Laryngeal foreign bodies in some cases, especially when it is narrow cause little airway obstruction and may even present like upper airway infection. This can delay the diagnosis and even may be mis-treated as laryngitis.

Conclusion: A Laryngeal foreign body shows a wide variety of presentations depending on its size and shape. Hence, the children with laryngitis like symptoms should be investigated for foreign body aspiration irrespective of the symptoms if a history of foreign body ingestion was given.

Foreign body aspiration is a major cause of accidental death in children.1 Foreign body ingested can either enter the airway or oesophagus. If it enters the airway, it can either get lodged in larynx above the vocal cord or enter the trachea which may further lead to bronchi. Laryngeal foreign bodies are a rare occurrence in the paediatric age group in comparison to bronchial foreign bodies. 2 Most foreign bodies lodge in the bronchial tree and only a small percentage (around 4%) become struck in the larynx. 3 While the lower respiratory tract foreign body symptoms raise an index of suspicion, laryngeal foreign bodies particularly those causing incomplete obstruction, may present with a different clinical picture resembling infection.4 The presentation of laryngeal foreign body depends upon the size, shape, site, nature of foreign body and the degree of obstruction leading to a great variability in symptoms. 2, 4, 5 Sharp objects may cause internal damage in the larynx with or without breathing difficulty depending on the size and shape of the object. Objects like pin may cause little stridor but can be extremely painful. This kind of laryngeal foreign bodies have been misdiagnosed as recurrent laryngitis or asthma for a long duration in few instances. 6, 7

A 10-year-old male child was referred to the ENT department with complaints of throat pain and dysphonia for the past 1 day. He gave the history of foreign body ingestion 7 days back. He was apparently normal then. For the past one day, he complained of throat pain. He didn’t have any breathing difficulty but had odynophagia and hoarseness of voice. He didn’t eat anything since the throat pain started. On examination, he had painful mouth opening, tenderness in the anterior part of neck and mild increase in body temperature. His X-ray (AP and lateral view) of neck was taken. In X-ray, a radio-opaque sharp object seemed like a pin was seen piercing the posterior pharyngeal wall and is present above the vocal cord, just below the epiglottis. 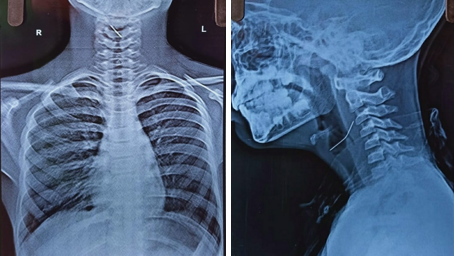 After confirming the presence of foreign body, the child was planned for foreign body removal under general anaesthesia. He was given intravenous antibiotics, painkiller, anti-reflux medications and kept nil per oral. He was taken inside the operation theatre and under general anaesthesia, his larynx is visualized using laryngoscope. A sharp turban pin was seen piercing the posterior pharyngeal wall just below the epiglottis. It was carefully removed using forceps without injuring the neighbouring structures. After removal, pus was seen leaking out from the removal site. Pus was suctioned out and the larynx was completely explored. Post operatively antibiotics and nebulization were given. The patient is completely normal now.

A metallic pin in the larynx above the vocal cords) 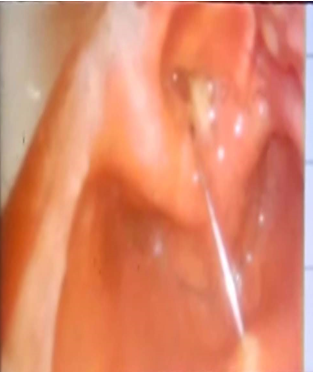 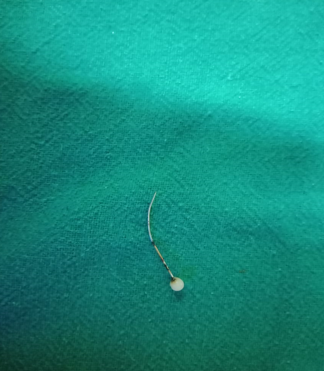 Aspiration of foreign body into the respiratory tract is a common accident, which occasionally has a fatal outcome. It is said to be one of the commonest recognized causes of sudden death, especially in children.8 The majority of the foreign bodies are lodged in the bronchial tree; in five series of cases an incidence of 88-96% was reported.9, 10, 11, 12 The larynx is a much less common site and accounted for only 2-6.7% of cases.9, 10, 12, 13 A foreign body in larynx can cause complete airway obstruction leading to sudden death if not promptly removed. On the other hand, a small foreign body, especially when thin, laminar or triangle shaped may present with a partial laryngeal obstruction, which may present with less severe symptoms. In our case, the patient didn’t complaint of any symptoms for the initial 5 days, even though he had history of foreign body ingestion. This is mainly because of the shape of the foreign body. The metallic pin was too narrow to cause any airway obstruction which may delay the diagnosis. Likewise, although choking episode is obtained in the majority (73-85%) of patients with inhaled foreign bodies the diagnosis may be delayed.9, 11, 13 The length of time to diagnose ranged from less than 24 hours in 55% patients to 5.5 months in 5% of cases. However, most laryngotracheal foreign bodies were diagnosed in a week, probably because of greater severity of symptoms.14 In order to prevent the aspirated foreign body go unnoticed, diagnostic workup should be done in all cases with history of foreign body ingestion, even though the patient didn’t show any symptoms. A strong index of suspicion, adequate history and careful examination of x- rays will aid diagnosis. A detailed pre-operative assessment is essential, since the type of anaesthesia, operative technique and any secondary complications expected can be determined by the exact location and shape of the foreign body. During the whole procedure, the patient’s blood oxygen saturation is monitored carefully. 3-dimensional CT scan is a more sensitive diagnostic modality for foreign body aspiration in comparison to conventional radiography and is increasingly becoming the image of choice, especially for radiolucent foreign bodies like plastic materials.15, 16 X-ray may be enough in some cases if the object is metallic like in our case. In case of impacted foreign body, tracheostomy or jet ventilation may be considered. It is also equally important to counsel the patient to prevent further episodes in the future.

A laryngeal foreign body presenting with infection like symptoms rather than obstruction symptoms is a rare occurrence. It can even go mis-diagnosed as laryngitis. So, it is always advised to ask detailed history of foreign body ingestion and do relevant examination in all children with laryngitis like presentation irrespective of the presence or absence of airway obstruction symptoms.