Materials and Methods: A total of 1056 students of secondary school recruited for the present study in the age range of 12 to 17 years from English medium CBSE schools of North India. A learning disability self screening tool was administered on all students participated in the present study.

Results: The outcome of the current study showed that almost 12% to 15% of students were having some component of learning disability.

Learning disability is caused by environmental risk factors and multiple genetics. At the central nervous system level learning disability is associated with unusual structure and function, especially in the left hemisphere reading and language network.1 Learning disability also involves phonological disorder as well as delay in language skill and processing speed.2 Recently, neuroimaging methods which include functional and structural magnetic resonance imaging, neurophysiology, electrophysiology and diffusion tensor imaging have appreciably contributed to literature about the neurobiology of learning disability.

Need for the study

The aim and objective of the study to find out prevalence of learning disability in North India.

The study was approved by the ethics committee of Shri Jagdamba Charitable Eye Hospital, Sri Ganganagar, Rajasthan. A total of 1056 students of secondary school recruited for the present study including 659 boys and 397 girls in the age range of 12 to 17 years from English medium CBSE schools. All the participants were randomly selected based on their willingness to participate in the study. They were explained in detail about the purpose of the study.  Informed written consent was taken from parents of the students participated in the present study. Learning disability self screening tool was administered on all participants participated in the study. Learning disability self screening tool is a tool with 13 questions with three point rating scale i.e. always, sometimes and never. Data was collected by undergraduate students of audiology and speech language pathology under the close supervision of qualified speech language pathologists with master degree in speech language pathology. The questions were “I learn class material slower than I would like”, “I spend more time studying than my classmate do”, “I have poor memory”, “Spelling is hard for me”, “I cannot find mistakes by my written work by myself”, “difficulty in expressing ideas in writing”, “difficulty saying unfamiliar words correctly while reading”, “ difficulty understanding and remembering what I read”, “make error in remembering basic math facts”, “difficulty in solving math problems”, “difficulty using the right words when I explain my ideas to someone”. The percentage and proportion was calculated for responses of each question. In addition Pearson correlation was carried out using SPSS (version 17, IBM Corporation, Bengaluru, India) to study correlation between responses of questions. 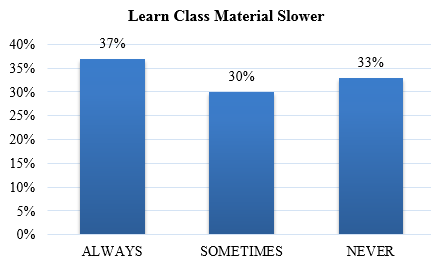 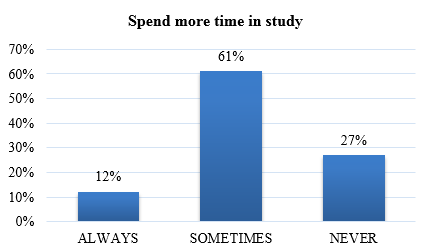 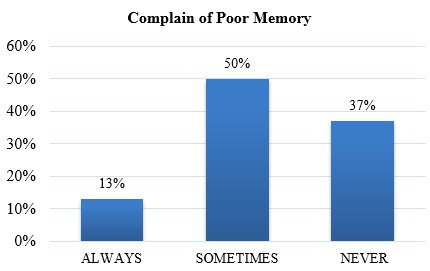 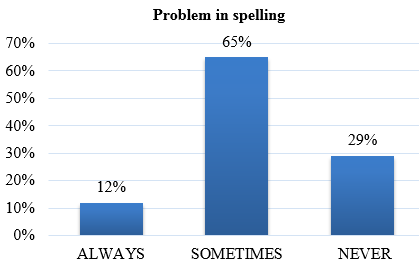 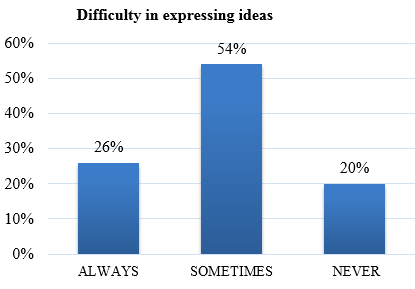 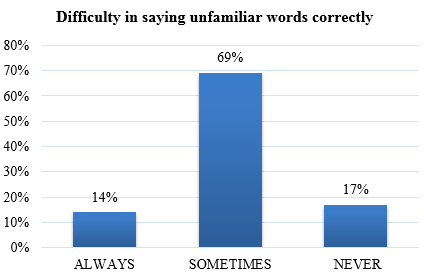 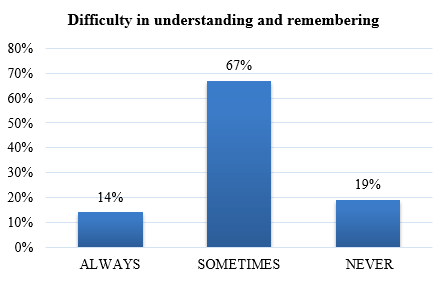 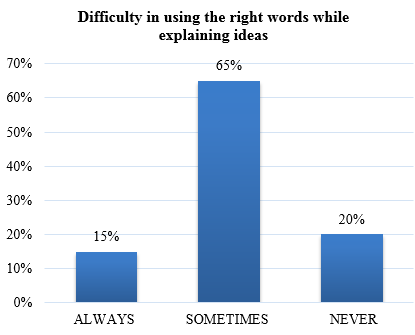 Similar to present study, Mogasale et al.3 in 2012 reported 15.17% as prevalence of learning disability in a south Indian City. Similarly, Sridevi, George, Sriveni and Rangaswami in 2015 revealed that 19% of school going students were suffering from learning disability.4