Study of anatomical variations of pterion in Karnataka population

The Pterion is a point of sutural confluence formed by frontal, parietal, temporal and sphenoid bones. Center of pterion is located 4cms above the midpoint of zygomatic arch and 3.5cms behind the fronto-zygomatic suture. Pterion is a reference landmark for many regions of the brain. Knowledge of various types of pterion is important in neurosurgeries as pterion keyhole approach has several advantages over traditional craniotomy; it has got radiological significance in interpretation of radiographs; in forensic medicine, it has been used for estimation of age and stature; and types of pterion has racial variations, hence it has got anthropological significance. Hence, the present study was taken to assess various types of pterion in South Indian adult human skulls.

Objectives: To classify the types of pterion based on Murphy’s classification and compare the right and left sides.

Materials and Methods: The study was conducted on 100 adult dry human skulls collected from Kempegowda Institute of Medical Sciences & Research center, Bangalore. The various types of pterion were noted. All the readings were tabulated and subjected to analysis.

Statistical Analysis: All measurements and frequencies of the data were tabulated. The mean, standard deviation for each of the measurements were assessed. Statistical software SPSS version 16 was used. Right and left side were compared using One-Way ANOVA (Analysis of Variance).

Results: Various types of pterion were observed. Spheno-parietal was the most predominant (78%) type, followed by epipteric (16%), stellate (4%) and fronto-temporal (2%).

Conclusion: The results of the present study can be utilized by neurosurgeons, radiologists, anthropologists and forensic experts. The findings can be used in future for comparing various types of pterion from a different population, race or species altogether.

Pterion is a point of irregular H-shaped sutural confluence seen in the norma lateralis of skull, formed by the frontal, parietal, temporal and sphenoid bones. Pterion corresponds to the site of the antero-lateral fontanelle of the neonatal skull, which closes in the third month after birth.1

It is also known as the sylvian point. Fronto-zygomatic suture and midpoint of zygoma can reliably be used in locating pterion. It is located 4cms above midpoint of zygomatic arch and 3.5cms behind fronto-zygomatic suture.2 Pterion receives its name from the greek word “Pteron”, meaning wing. In greek mythology, Hermes, messenger of the gods, was enabled to fly by winged sandals, and wings on his head which were attached at the pterion.

One or more sutural bones appear between the sphenoidal angle of the parietal and the greater wing of the sphenoid known as pterion ossicles or epipteric bones,2 these sutural bones may be mistaken radiologically for fracture of the skull in the pterion region.3

Pterion is an important landmark for anterior branch of middle meningeal artery, broca’s motor speech area to the left, insula, lateral cerebral fissure, for the pathologies of optic nerve, orbit, sphenoid ridge and for the anterior circulation aneurysms and tumors.4

Murphy’s classification of pterion include 4 types of pterion namely,

Objectives of the Study

The present study was conducted on 100 adult human skulls collected from the department of Anatomy and Forensic Medicine at Kempegowda Institute of Medical Sciences and from other Medical and Dental colleges in and around Bengaluru.

It is an observational study. All human skulls (irrespective of sex) with intact calvaria, well defined sutures and erupted third molar teeth are considered for study. Damaged skulls, old skulls with obliterated sutures and skulls of newborn, infants and children are excluded

Skulls were observed macroscopically with the naked eye for sutural pattern. Skulls are classified based on Murphy’s classification.

Findings of sutural pattern of pterion were noted. Values were recorded separately on right and left sides and compared. Values were also compared with previous studies for their statistical significance.

The data collected in this study were analysed statistically using descriptive statistics like percentages, mean and standard deviation. The statistical analysis was done using SPSS 16.0 software. To compare between right and left sides, One-Way ANOVA (Analysis of Variance) was used. 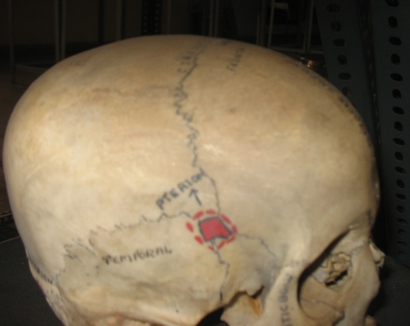 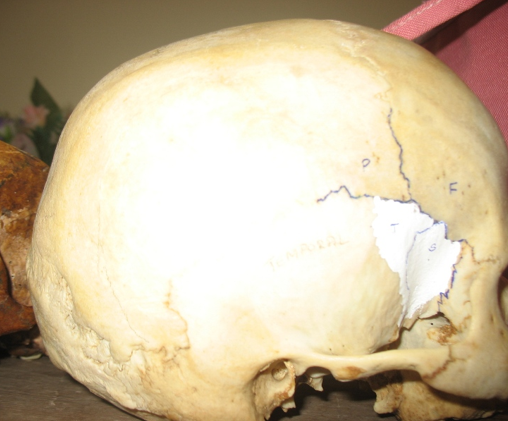 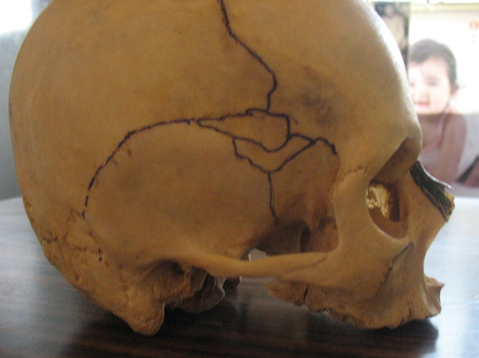 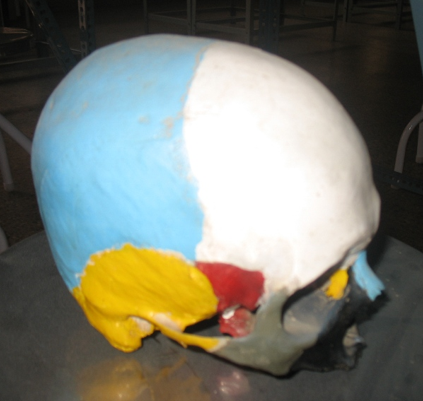 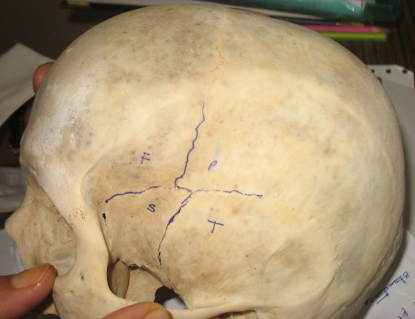 In the present study the occurrence of SP type was 78% which is high when compared to Hussain Saheb et al., Mwachaka P.M et al. and Oguzetal studies. The high occurrence of SP type could have an evolutionary basis. The SP type of pterion is the dominant form in humans whereas the fronto-temporal type is dominant in non-human primates. In primate evolution, the antero-superior segment of the squamous part of the temporal bone of lower primates become detached from its parent and gets incorporated into the postero-superior angle of the greater wing of the sphenoid bone of humans, thereby changing the pterion pattern from the fronto-temporal type of non-human primates to the spheno-parietal type of humans. Frontotemporal type is least commonly seen in the present study. This is similar to Ankur Zalwadia et al. study but low when compared to Oguzetal, Mwachaka P.M et al. and Hussain Saheb et al. studies. The occurrence of fronto-temporal pterion in man is considered to be atavism due to a natural reversion of a stage in the phylogenetic development of man in which the fronto-temporal type was the normal and constant.

From the present study it was seen that the same type of pterion occurs more bilaterally than unilaterally. This is in agreement with the findings among kenyans but differs with that among turks, where the occurrence of pterionic type varied significantly on the left and right sides. These differences could be due to the different sample sizes used in the study. In the present study, sphenoparietal type was the predominant type. This is in agreement with other studies.

Present study has shown that the same type of pterion occurs more bilaterally than unilaterally. This is in agreement with Wandee C et al., Mwachaka PM et al. and Ankur Zalwadia et al.

The author declares no conflict of interest.