Congenital Cleft Lip and Palate is a common birth defect with an incidence of 1 in 600 to 800 live births. This defect usually affects either the left, right or in some cases both sides of the lip and is called a Tessier Type 3 cleft. Clefting of the face in the midline is exceedingly rare and such a case of a Median Facial Cleft Syndrome is being reported which occurs in nearly 1 in 1,000,000 live births. This was first described by Bechard in 1823 and can be sporadic or part of an inherited syndrome. The child had a median cleft of the upper lip, nose, and palate of a severe, complete variety, with absent philtrum of the upper lip, premaxilla, columella, nasal septum and vomer.

A 4-year-old female child was brought to the Smile Train department of our hospital with a congenital defect of the upper lip. The child had difficulty in feeding at birth, with repeated aspirations and upper respiratory tract infections. This abated with age. The child did not develop clear speech though the other developmental milestones were normal. The child belonged to the lower socio-economic class, no family history of similar anomalies was present. The mother did not suffer from any viral illness, nor did she consume alcohol or drugs during the pregnancy. She had a normal vaginal delivery at term without any significant antenatal event.

On examination, the child had a median cleft of the upper lip, nose and palate of a severe, complete variety, with absent philtrum of the upper lip, premaxilla, columella of the nose, nasal septum and vomer. She also had a single nostril with a broad nasal bridge with hypertelorism. The child had normal growth and intelligence with no other congenital anomalies [Figure 1, Figure 2]. 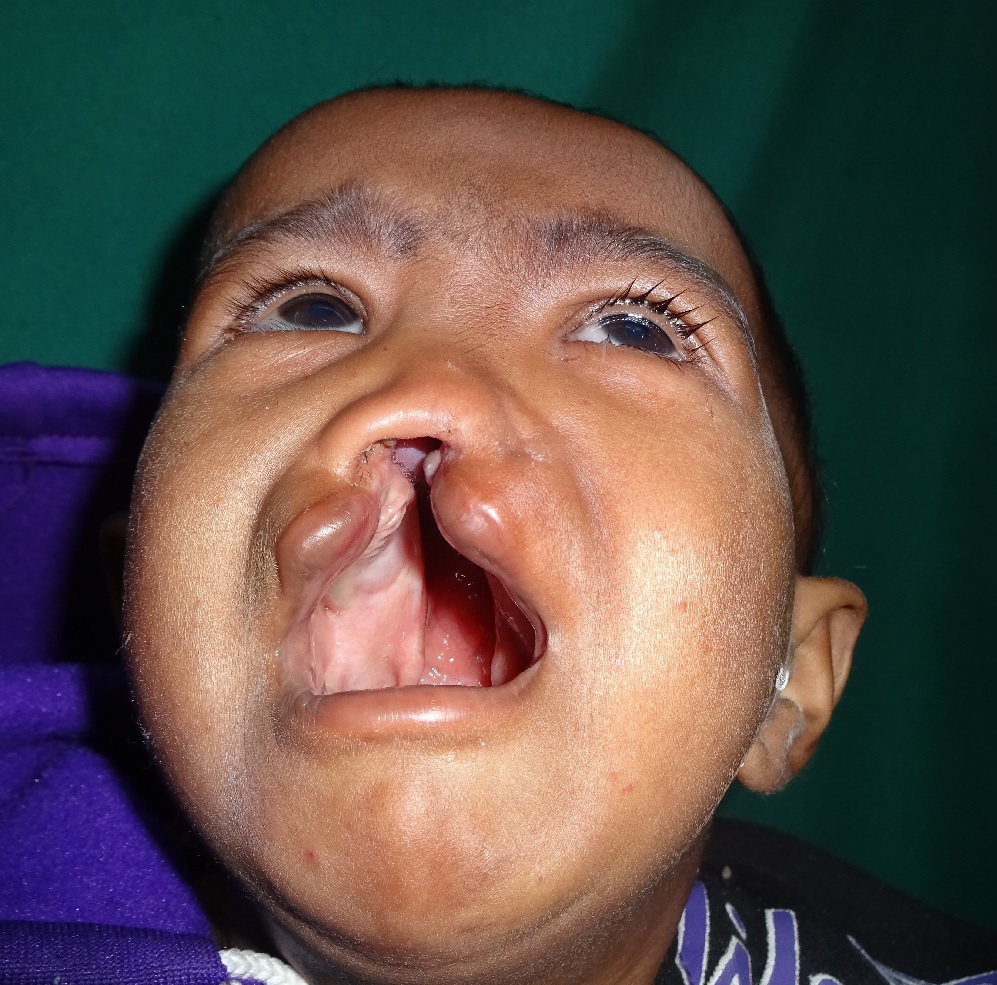 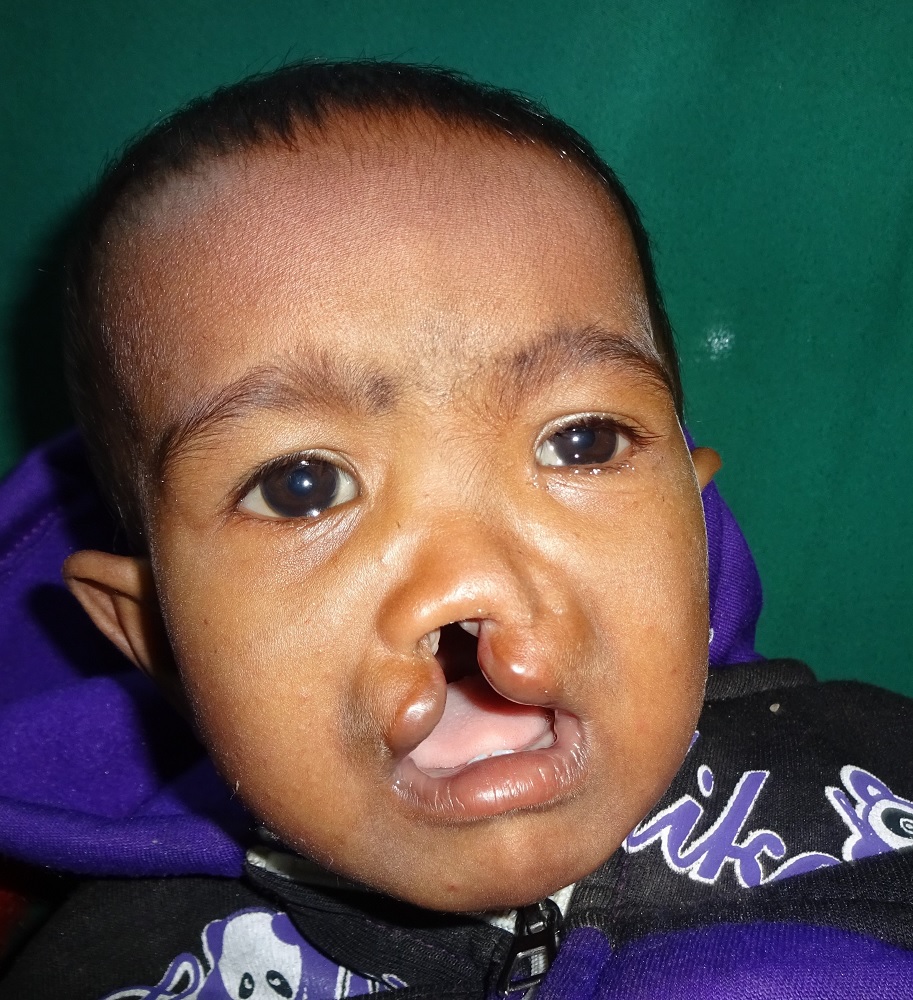 Paul Tessier in 1976 classified Craniofacial Clefts from 0 to 14 in a clockwise fashion with the orbit serving as the axis. Median cleft lip is also called a Tessier 0 cleft and is defined as any congenital vertical cleft through the centre of the upper lip.1 Tessier based the 15 categories (0 to 14) on clinical, radiological, and surgical findings (0 to 14 cleft sites).2 In Tessier 0 through 14 the midline or median Clefting can vary from a small notch in the central vermilion of the lip to complete loss of central lip, bifid nose and hypertelorism.

Though cleft lip and palate (Tessier Cleft 3) is a common congenital defect, the occurrence of Tessier 0 clefts is exceedingly rare, with an incidence in the cleft patient population of 0.43 to 0.73% nearly 1 in 10,00,000 live births.3

This frontonasal maldevelopment has been classified into two types:

1. DeMyer sequence: frontonasal deformity associated with extreme hypotelorism, holoprosencephaly, and facial deformity which can range from cyclopia to midline facial cleft with arhinia and premaxillary agenesis.4 This is associated with an alobar or semilobar brain malformation.

The prognosis in the first variety is bleak whereas in the second type, the patients do well with planned surgical reconstruction as their life expectancy is normal.

The other deformities that may exist with median clefts include deformity of lower extremities, brain malformations like anterior cranium bifidum, hypoplastic frontal sinuses, dense calcification of the falx and interhemispheric lipoma. Patients may also have a V-shaped frontal hairline (widow's peak), seizures due to the agenesis of corpus collosum, and ophthalmologic defects like refractive errors, strabismus, narrow palpebral fissures, nystagmus, and eyelid ptosis. Sometimes midline diastemas of maxillary dentition may appear as the mildest form of this anomaly. Despite these anomalies, these patients usually have normal intelligence.

The majority of the cases are sporadic, but familial cases have also been documented.6 With a positive family history, the chance of the cleft recurring in a subsequent child is as high as 50%. For some unknown reason twinning is more common in these families than the general population.7

The treatment of median clefts depends on the clinical presentation and may vary from simple alignment of orbicularis oris and vermilion, to bring tissue into the upper lip by means of local flaps like the Abbe flap, to reconstruct the cupid's bow and philtrum for true median clefts, and complex craniofacial procedures like reconstructing the nasal anatomy in case of false median clefts.8, 9

Correction of hypertelorism is best delayed until the patient is eight years old.

We are presenting a rare case of a Tessier 0 cleft that is of the false median facial cleft variety. The rarity of this median cleft and the varied presentation entails that the treatment must be carefully evaluated and tailormade for each patient.

The author declares no conflict of interest.