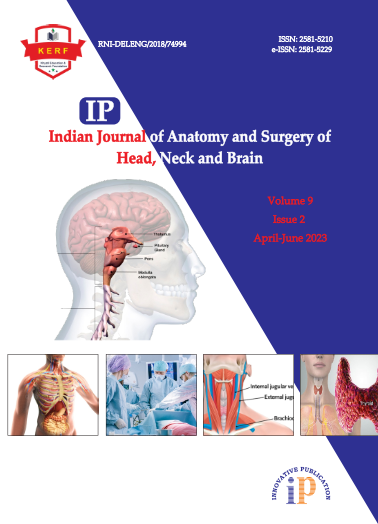 Word rhino- and - lith, literally meaning “nose & stone”. So, it is basically a stone that forms inside the nasal cavity. It is an uncommon disease that may present asymptomatically or as an accidental finding. Rhinolith itself is a rare condition out of which giant rhinolith case is extremely rare. If left undiagnosed or untreated it can cause rhinosinusitis, erosion of the nasal septum & medial wall of maxillary sinus & palatal perforation.

Bartholin published the first case report in 1654.1 It is a calcareous deposition which is formed as a result of mineralization of salts over a foci which could be endogenous or exogenous present within the nasal cavity. Exogenous foci includes foreign body & endogenous includes any retained secretion or a chip of bone due to any trauma. Giant rhinoliths are rare now a days due to advanced diagnostic techniques which helps in identifying it at an earlier stage. Its incidence is 1:10000 attending in otorhinolaryngology outpatients.2 Mainly presents with unilateral foul smelling nasal discharge, fetid odor, nasal obstruction, ottorhea, headache, nasal bleeding may or may not be associated with facial pain depending upon the extent of spread. The duration of medical illness may range from months to years.3 Females are more commonly affected then males.4 In this paper we report a 58 yr old lady woman with a calcified mass in the left nasal cavity causing foul smelling nasal discharge, nasal obstruction & facial pain. Relevant routine & radiological investigations done. Calcified mass along with granulation tissue was removed by endonasal approach.

A 58 yrs old female came to outdoor department of otorhinolaryngology at MAMC, Agroha for care with left sided nasal obstruction accompanied by foul smelling purulent discharge from the left nostril for two and a half years which was insidious in onset and gradually progressive in nature. Discharge was yellowish in color, thick in consistency, purulent in nature & foul smelling. There was no history of trauma, systemic disease or constitutional symptoms. The patient was treated as bacterial rhinosinusitis by some specialist. But she was still complaining of runny nose and also had left sided facial pain & bloody nasal discharge for 6 months. She was admitted under ENT department for further evaluation.

Anterior rhinoscopic examination done but was inconclusive as nasal cavity was pooled with secretions. Suctioning was done & then it revealed the presence of granulation tissue along with irregular off white & brownish solid mass occupying the left nasal cavity which was stony hard as shown in Figure 1.

Rhinolith in the left nasal cavity 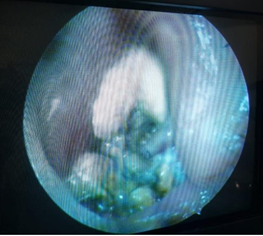 We tried passing a probe around the mass as it was adherent to the septum & turbinates. For the same complaints patient took treatment from some local quacks. There was no significant past history of any medical illness, patient was otherwise healthy. No history of any foreign body in the nose or nasal trauma or any nasal surgery. On behalf of history & clinical examination, diagnosis of left sided rhinolithiasis was made which was further confirmed by radiological examination. X- ray was done & it showed a calcified mass in the left nasal cavity. Now to confirm the extent CT scan was done. It revealed that calcified mass was extended form left nasal vestibule upto the choana & left maxillary sinus haziness was also noted. 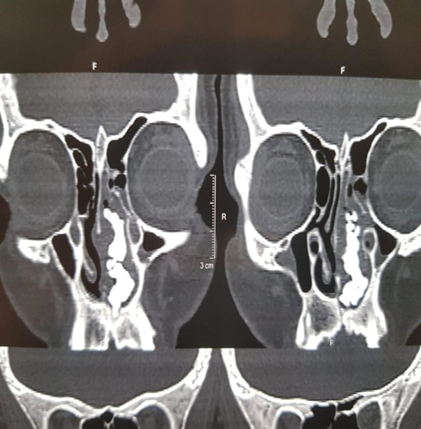 Surgery was planned. Routine pre-operative investigations done & were found absolutely normal. PAC clearance obtained & was declared fit for surgery. Under general anaesthesia, nasal cavities were inspected by using zero degree endoscope confirming the presence of a giant rhinolith. It was difficult to remove it intoto as it may lead to mucosal injury. So it was removed in pieces with the help of nasal endoscope. Granulation tissue was also removed. 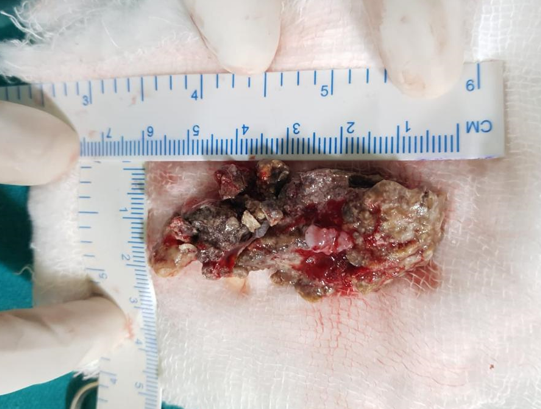 After its removal, raw nasal mucosa was left which may result in synechiae formation. To prevent this, bilateral nasal packing was done with merocel & on addition we prepared a X ray film nasal pack, by cutting it exactly to the size of merocel & after applying antibiotic ointment to it, inserted medially to the merocel of left sided nasal cavity. Post op was uneventful & proper antibiotics course was given. Nasal packing was removed after 48 hrs & X ray film pack used was removed after 7 days. Histological analysis of soft tissue was identified as granulation tissue. Patient was kept for subsequent follow ups for 1 year & no recurrence was found.

Rhinolith is derived from Greek words ‘rhina’ and ‘lithos’ meaning nose and stone.5 It was first described by Bartholin in 1654. It was first chemically analysed by Axmann6 in 1829. It is a calcareous deposition which is formed as a result of mineralization of salts over a foci which could be endogenous or exogenous present within the nasal cavity. Exogenous foci includes foreign body, stone, cotton, bead, sand, fruit, parasites etc. & endogenous includes any retained secretion, tooth, clotted blood, dried pus, desquamated epithelium or a chip of bone due to any trauma. It is a rare entity found nowadays with a incidence rate of 1in every 10000 otolaryngology patients. It is found usually in the age group between 8 to 25 yrs with female predilection. Exact pathology is still unclear. Initially it often remains asymptomatic. Typical symptoms are unilateral fetid nasal discharge, nasal obstruction, facial pain, epistaxis, anosmia, swelling of face or nose. If undetected for many years rhinoliths may grow large enough to cause nasal obstruction and distortion or destruction of surrounding structures.7, 8 The differential diagnosis of rhinolithiasis includes chronic inflammation, osteomyelitis, benign tumors, and malignant tumors. Among the benign tumors are calcified nasal polyps, ossifying fibromas, osteomas, chondromas, odontomas, calcifying angiofibromas, nasal gliomas, and septal desmoid tumors; malignant tumors include osteosarcomas, chondrosarcomas, and squamous cell carcinomas. Diagnosis is usually based on history, physical examination and radiological investigations. CT scan helps in accurate diagnosis, due to its sensitivity in recognizing even small amounts of calcification & it also provides extent of spread to adjacent structures & also helps in differentiating it from other entities. If left untreated it can lead to potential complications like rhinosinusitis, erosion of the nasal septum and medial wall of the maxillary sinus, and perforations of the palate. Discussing about the treatment, surgical extraction is the treatment of choice. Recurrence after removal has never been reported.

Diagnosis can be made by keeping a strong suspicion based upon symptoms, history of putting foreign body into the nose, physical examination and complementary tests. The possibility of rhinolith cannot be excluded in modern era as it is still prevalent and went unnoticed. The main challenging aspect of this disease is misdiagnosis with more common diseases such as rhinosinusitis. Our case was unique in regard to an incorrect diagnosis twice by specialists because of vague history and incomplete physical examination. The current case report streeses the importance of considering the possibility of rhiolithiasis in unilateral nasal obstruction and nasal discharge to prevent misdiagnosis and delayed diagnosis. So, in every case of nasal obstruction, the examination must include anterior rhinoscopy and rigid nasal endoscopy. Radiological assessments including simple X-ray and paranasal CT scan support the diagnosis by showing calcified concentrations in the nasal cavity and would be a great help in planning surgical approaches.